2021 Kawasaki KLR 650 Announced For The US Market - Auto Quizzes 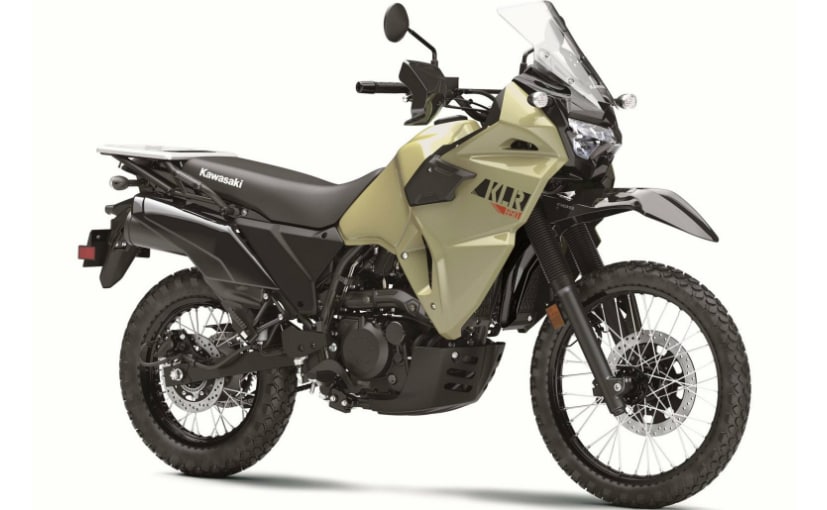 Kawasaki has announced the return of one of its most famous dual-sport models for 2021, the Kawasaki KLR 650. The 650 cc thumper comes with some improvements, including “new” technology, a redesigned fuel tank, a new digital dash, and changes in the clutch and transmission after being taken off the line-up in 2018. There are minor cosmetic updates too, and although the iconic dual-sport motorcycle will make a comeback, at least in the US market, it’s unlikely to be launched across the Atlantic, or in India. The KLR 650 has been announced in two variants, the KLR 650 Adventure and the KLR 650 Traveler. Prices for the new Kawasaki KLR 650 begin at $ 6,699 (approximately ₹ 4.88 lakh under current exchange rates). 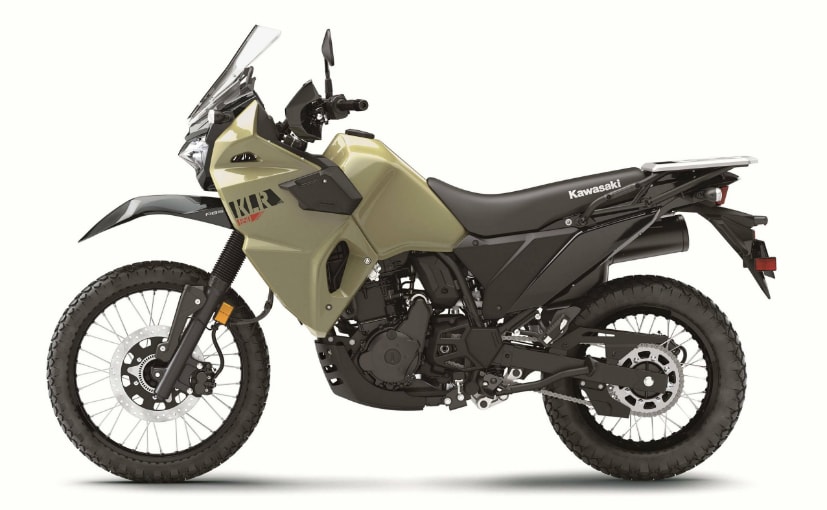 The new Kawasaki KLR 650 still gets its long-running 652 cc, single-cylinder engine, but now gets fuel-injection. According to Kawasaki, the fuel-injected engine not just starts up easier, but also makes for greater range, combined with the greater usable volume in the new fuel tank. Revised intake and exhaust cam profiles also contribute to better performance on the new machine, with more power and torque in the mid-range. Kawasaki has also introduced a stronger cam guide material, as well as new balancer chain adjuster lever, which was known to cause breakdowns in earlier models of the KLR 650. The single-cylinder engine uses a four-valve, DOHC design, with liquid-cooling, and it makes 40 bhp at 6,000 rpm and 53 Nm of peak torque at 4,500 rpm. 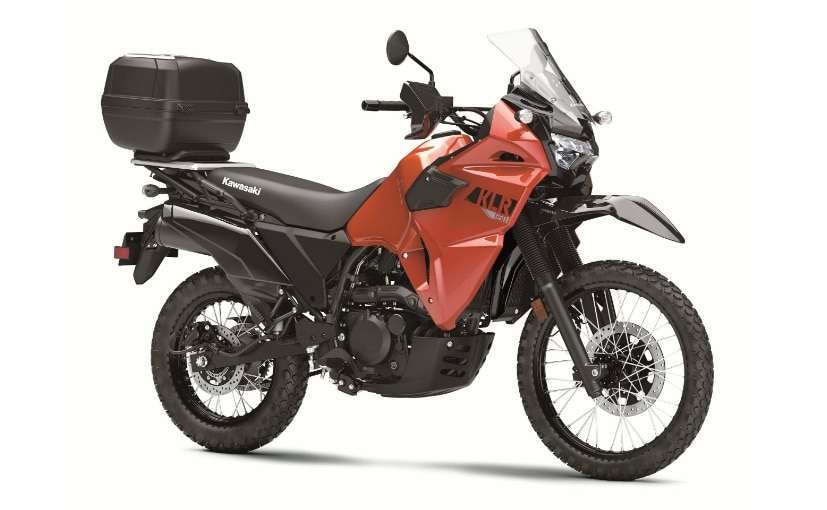 Wider handlebar, rubber mounts under the handlebar and footpegs, and a longer swingarm with new front-end geometry

Several parts have been updated for increased long-distance capability, including a longer wheelbase, and new front-end geometry that improves stability on the highway. The ergonomics have also been tweaked for more comfort, and new rubber mountings to reduce vibrations, and increased generator capacity for powering electronics and accessories like fog lamps, heated gear and the like. The new KLR 650 also gets a rally-styled fairing, along with an adjustable windscreen, which is slightly taller than the old 2008-2018 model. The front brake has been updated to a 300 mm disc brake with a two-piston caliper, while at the rear is a 245 mm disc, also with a two-piston caliper. 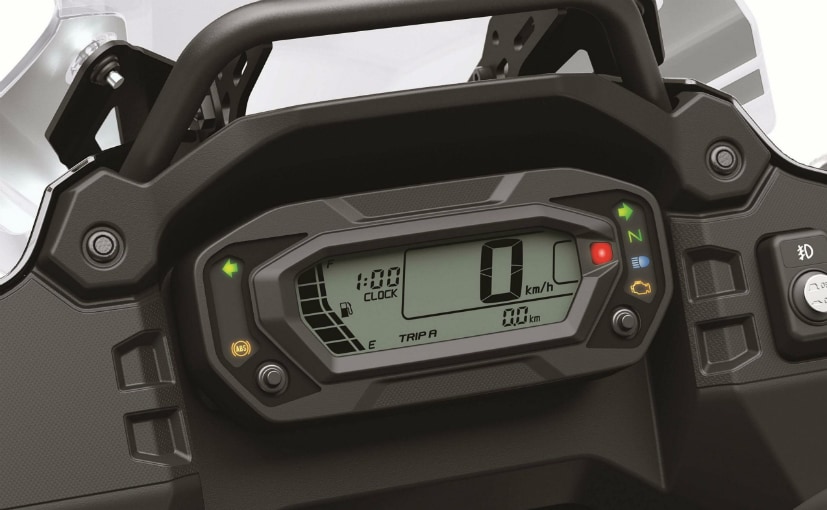 There’s also a new LCD speedometer assembly, and on the top-spec Adventure model, there’s also a USB port and plug-style power outlet to charge up accessories, cameras and phones on the move. Also new is a LED headlight, and both the standard and Adventure models get updated handlebars that are wider than the previous model. The Adventure variant features a set of 21-litre panniers, LED auxiliary lights, engine guards and two power sockets. The Traveler comes with two power sockets and a 42-litre top case. 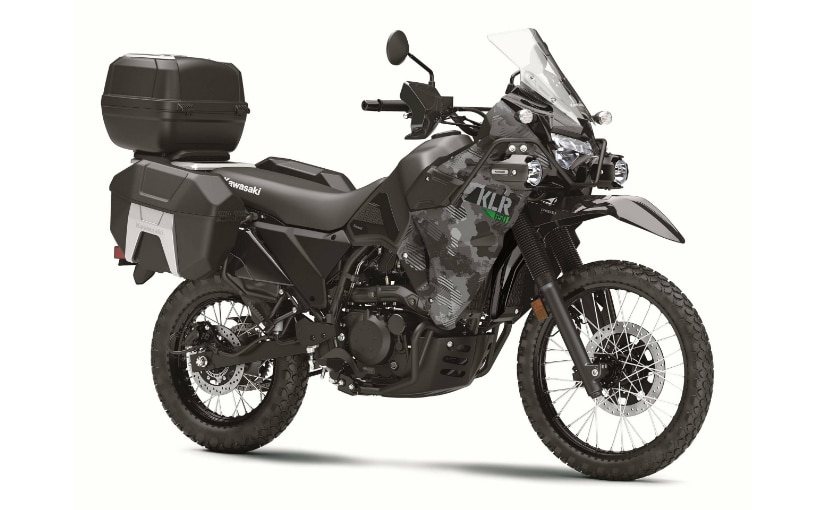 The Kawsaki KLR 650 Adventure gets standard side cases, aux lights, engine guard and tips the scales with 221 kg kerb weight

The KLR 650 continues to use a double-cradle frame, but on the new model, the subframe is welded on, opposed to the bolted on rear subframe which was notorious, again for the mounting bolts breaking down in the old two-piece design. Suspension is handled by 41 mm telescopic fork with 200 mm travel, with a Uni Trak-style rear shock, adjustable for preload and compression, with 185 mm travel. In non-ABS trim, the KLR 650 weighs 207 kg, while the ABS version weighs 209 kg. The Adventure version with crash bars, panniers, power outlets and aux lamps weighs 221 kg. 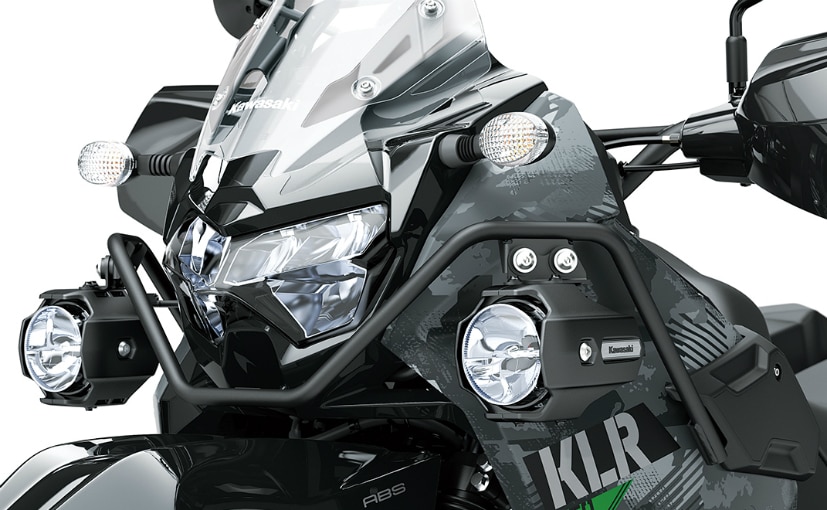 The Kawasaki KLR 650 may be relatively unknown here in India, but the dual-sport model has a cult following, particularly among round-the-world (RTW) and multi-continent adventurers. The model has a particularly strong fan following in North America, with many seasoned adventure riders preferring the rugged 650 cc single-cylinder model for long distance riding, heading north to Alaska, or south to Tierra del Fuego at the southernmost tip of South America. Naturally, the KLR 650’s loyal fans will be very happy with the news. Unfortunately though, it’s unlikely to be launched in India.